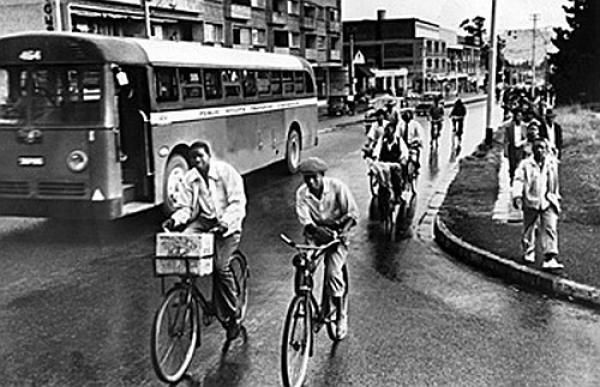 Dr. Martin Luther King Jr. rose to prominence in the U.S. civil rights movement in the Montgomery, Alabama, bus boycott, which was organized after the arrest of Rosa Parks for failing to surrender her seat near the front of a public bus. When the boycott began on Dec. 5, 1955, 90 percent of Montgomery’s black citizens stayed off the buses.

The protest against segregation on Montgomery’s buses was started by the Women’s Political Council, a group of black professionals founded in 1946. Dr. King, then a 26-year-old pastor, became involved when the Montgomery Improvement Association was formed to coordinate the boycott and he was selected to lead the association, according to the Martin Luther King, Jr. encyclopedia at Stanford University.

Dr. King later wrote: “The Negro people of Montgomery, exhausted by the humiliating experiences that they had constantly faced on the buses, expressed in a massive act of noncooperation their determination to be free. They came to see that it was ultimately more honorable to walk the streets in dignity than to ride the buses in humiliation.”

The boycott ended more than a year later, when the U.S. Supreme Court ruled that discrimination in public transportation was unconstitutional. The photo above, from the King Center in Atlanta, illustrates how bicycles became part of the boycott campaign, a way to make the journey on freedom’s road.

Freewheels Houston was launched in 2015, committed to the idea that bicycles are instruments of freedom. Donated bikes, repaired by volunteers, provide mobility to people who have fled oppression and violence around the world. We also give bikes to military veterans emerging from homelessness.

The people who will volunteer on our day of service on Monday will help Freewheels fulfill our goal of getting more bikes to refugees, asylum seekers and others seeking to share in the opportunities presented by Houston’s economy.